The Difference between In and On 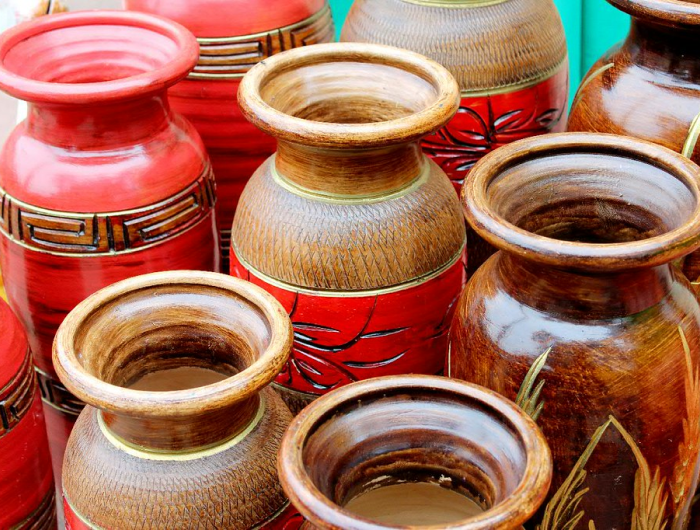 In Spanish, the preposition “en” is used to indicate position in space or time. But in English, there are two prepositions that replace “en”: in and on. It can be difficult to know which one to use when, and although they are often interchangeable, here are a few general guidelines:

Use in to describe a position inside a limited space (in a house, in a box, in a book). Example: My aunt paints the ceramics in her house.

Also, use in when talking about cities, towns, states, or countries. Example: Her house is in Aregua.

Use on to describe a position above or supported by or in contact with something (on the desk, on the potter’s wheel, on the plate). Example: She puts the ceramics on the shelves when they are finished.

On is also used with street names. Example: My aunt’s house is on Las Residentas Avenue.

Use in to describe a moment enclosed in a portion of time (parts of the day, months, years, seasons). Example: In September, my aunt sold twenty ceramic vases.

Use on when talking about specific dates. Examples: On Wednesday, she mixed up a new glaze. On Christmas Eve she receives the most orders.

When they are being used as prepositions of place, the opposites of in and on are “out” and “off.” Make sure not to confuse these either! For example, if your phone is in your pocket, it can fall out, but not off. If a cat is on a chair, it can jump off, but not out.

Useful Phrases with In

Useful Phrases with On

Word of the Month: Blossom

Shana Goodwin, September 16, 2021
What better word for September than “blossom”? In Asuncion in September, you can’t walk a block without stepping on Lapacho or Bougainvillea blossoms, or seeing them cascading over walls and doorways...
Read more

Emily Thomson, September 4, 2021
Meet the newest staff member at Primavera English! This beautiful blue beta fish now lives in one of our classrooms, where he delights students of all ages. The younger students are enthralled to watch him eat the fish food they give him, and he never misses the chance to show off his lovely colors...
Read more

Word of the Month: pretty

Shana Goodwin, August 2, 2021
Pretty is a pretty common word in English, because it has an adjective, adverb, and verb form. You will most often hear it being used in its adverb form, where it means “moderately,” or “quite”...
Read more